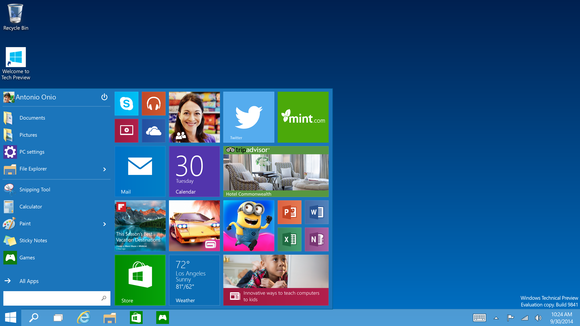 Microsoft's release of the first Windows 10 preview this week shows signs that the company's effort to unify the fragmented operating system for PCs, tablets and phones delivered with Windows 8.x is coming to life but not yet an exponential leap forward.

When the techincal preview got released, it included a "Preview builds" feature. It was supposed to allow you to download new preview builds and directly update to them. However, this feature isn't working as of now. By some registry hacking and deep digging, we were able to get a handful of new buildstrings and even their ESD names, but there's not yet a known way of downloading them.

we've learned that there is a simple registry tweak that gives you access to more Windows preview update options Windows 10 build 9841 was compiled on September 12, which was around three weeks ago. That's ancient in development time, so it's no surprise that build 9855 was recently compiled.

the operating system is seeing builds as new as a few days ago. Build 9855 was compiled on October 2nd, just two days ago.

do not attempt to enable these features if you do not know your way around the registry because right now, they don't provide any benefit to the user.