Home » Windows 8.1 Tutorials » How to show or hide store apps on the taskbar on windows 8.1 update

How to show or hide store apps on the taskbar on windows 8.1 update

in Windows 8.1 Tutorials - on 4:13 PM - No comments
There have been lots of rumors about what to expect from Microsoft’s forthcoming Windows 8.1 update 1, including that it will allow users to pin Windows Store apps to the taskbar -- a time saving tweak for anyone who avoids the Modern UI but still likes to use apps from time to time. So is it true, and what other tweaks has Microsoft made to its tiled OS?

Today, a preview build of Windows 8.1 Update 1 leaked to the Internet. Windows 8.1 Update 1 is a rollup of several updates as well as some new features which Microsoft plans to offer to Windows 8.1 users. While this update has nothing new of significance for regular Desktop users, it contains few notable changes to the Modern UI, the way it integrates with the Desktop and to Internet Explorer 11. I have successfully installed the leaked '6.3.9600.16596.WINBLUES14_GDR_LEAN.140114-0237' build inside the latest VirtualBox

Taskbar support for Modern Apps: Using the updated Taskbar settings, you can enable this feature so that running Modern apps show on the Taskbar,you just need to Right-click any empty space on the taskbar and click Properties. That opens up the familiar-looking Taskbar And Navigation Properties dialog box.

Again, this is nothing exciting. The ability to show any running apps on the taskbar is a basic feature of Windows since Windows 95 and so this is how it should always have been even for Store apps. Surprisingly, in this build, when you switch to the Modern app using the Taskbar button and start working in the app, the Taskbar hides automatically and does not show again even if the pointer touches the bottom edge of the screen. 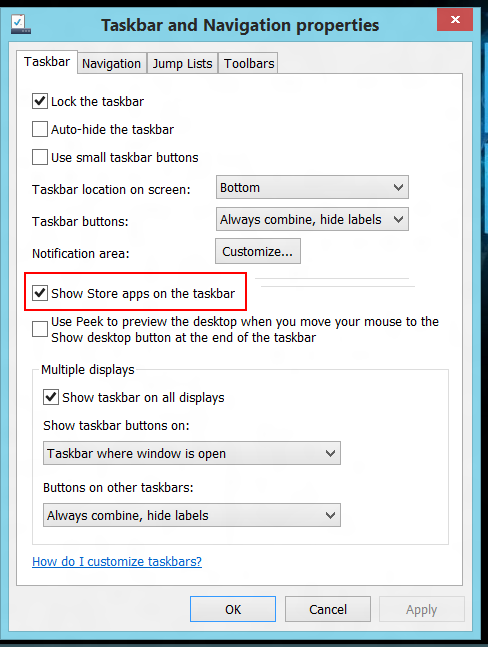 Microsoft is expected to make the Update 1 available to developers on March 11th before BUILD 2014
Tweet
Labels: Windows 8.1 Tutorials